I have been away for the last few weeks over the Christmas period. It has been an incredible few weeks of travelling and working.

I arrived back into the country on Thursday 10th January 2019. On Saturday I woke up at 6am and was ready to travel to York for the Girls Chess Day. The day was opened by the Sheriff of York, Mrs Vera Campbell. There were 29 young girls from the area who came to the day. The morning was spent looking at a famous game from the Women’s World Championship event from 2016, Kostenuik v Ponnkashyon. The game was a wonderful teaching aid looking at opening basics, active pieces and finishing with some nice tactics and middlegame ideas.

The girls then played two tournament matches before we looked at how to annotate a chess game. Noel Stewart ran through how chess clocks work with the players. They then finished the day with another two tournament games. Followed by a chess game looking at files, ranks and diagonals ‘Queen says!’

It was a wonderful day. The girls were all extremely focused and a few will be picked out to play in the U11 Girls County team in March. It was a very exciting day and it was so nice to see old and new faces.

The event was held on 12th January 2019 at Archbishop Junior School, Bishopthorpe, York. Thank you to Peter Cloudsdale for organising this event and for his work in other chess events across York.

Here is a photo of the event and there will be more photos taken from the event to come. 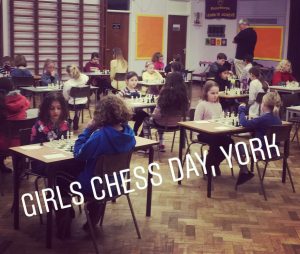